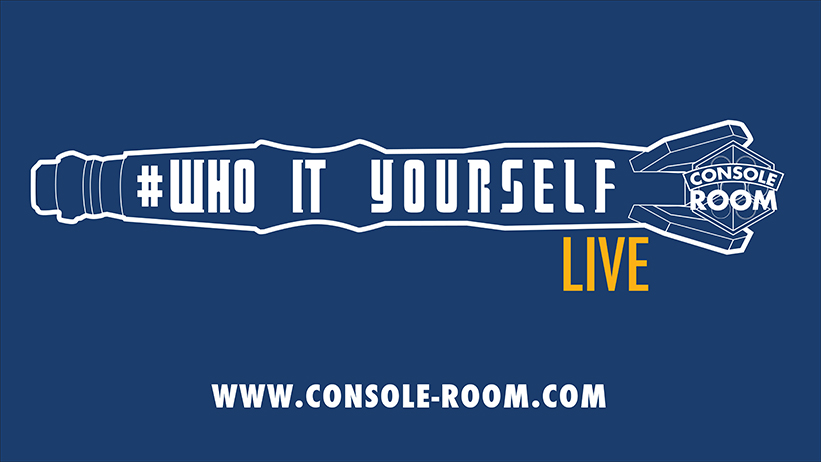 Don’t wait for January to join in on some Doctor Who fun! Our latest #WhoItYourself LIVE event “Time of the Doctor” starts at 6PM central time on Saturday, July 31, with pre-event content launching all week starting Tuesday, July 27!

Keep reading to learn more about how you can get involved in and be prepared for our day of fun, as well as see the full schedule below:

Where to Tune In

Our panels will be streaming live in our YouTube channel.

Our “Time of the Doctor” event may only be a few hours, but we have content launching all week leading up to the event! Please note that TIMED EVENTS (in blue) will be happening live at the listed time. All PRE-RECORDED EVENTS (in red) will be shared at the scheduled time on social media channels.

See what you can expect below:

“Time of the Doctor” Schedule

Please note that TIMED EVENTS (in blue) will be happening live at the listed time. All PRE-RECORDED EVENTS (in red) will be shared at the scheduled time on social media channels.

Not available when a panel or activity launches? Not to worry! While you might miss out on some of the live interaction, all posts and videos will still be available later when you are able to join us.

Nick Seidler is a writer and gamer.  He is co-author to the book “Red White and Who: The Story of Doctor Who in America” and has contributed to various other works including the “Outside In” series.  Nick has worked professionally writing and editing role-playing games and is the editor of the fanzine “The Diary of Doctor Who Role-Playing Games”.  His own Doctor Who RPG campaign is now in its 36th year of play with over 4860 adventures played and it is still going strong.  He also helps design fan-made Doctor Who games that appear at cons such as Console Room and Chicago TARDIS.  He’s hopes you enjoy gaming too.

Libby Shea is a gamer, writer, and fan-made board game creator. She has written for “Outside In Takes a Stab”, as well as contributed to “Red White and Who: The Story of Doctor Who in America” and the “Diary of Doctor Who Role-Playing Games” fanzine. She is the Chicago TARDIS Game Room Lead and has created/worked on several original fan-made games specifically for the convention. In her personal time, she plays in and Game Masters for a long-running Doctor Who RPG campaign.

John Till is the author of the Strange Stars Fate Rule Book, available at DriveThruRPG.com, currently writing and playtesting the Fate of Tekumel RPG, and co-founder of Saturday Night Space Opera, a monthly SF RPG event for Twin Cities fans. He has run the Doctor Who: Adventures in Time and Space RPG many times, and is proud to be running an all-LGBTQ campaign using the Star Trek Adventures RPG which has been running for more than two years now.

Expand on your experience with some of our on-demand content to add a little something extra special to your day. Take a look at our list below:

Need some coloring time to unwind? Our coloring pages have always been very popular at both CONsole Room and at the outreach events we have hosted outside of our convention. Bring that experience home by printing these out to color by hand or color digitally, then share on social media to add your art to our digital wall.

Mix Your Own Mocktails

We are very proud of the top notch refreshment experience we offer both through our ConSuite at our convention, as well as at some of our Who-themed experiences outside of CONsole Room. Bring a piece of that magic into your home during the event with some of our tried-and-true non-alcoholic beverage recipes!

Did you know that CONsole Room is created by Console Room Events, a Minnesota-based 501(c)(3) nonprofit organization? We are a completely volunteer-run event and our funding comes entirely from ticket sales for our event and generous donations from people like you.

While our 8th annual convention will be virtual and free for all to attend (please read the full announcement on our website), there are still some costs involved. We are using Give to the Max day on Thursday, November 19 – a day dedicated to supporting nonprofits throughout Minnesota – to help share some insight and awareness around CONsole Room and what we have been working on to share with this wonderful growing community. As we head into the final months of planning before the 2021 convention, we ask that you consider supporting our local convention in any way you are able to so that we can continue to bring you the best Doctor Who convention, and ongoing community engagement, that we can.

How to Get Involved: 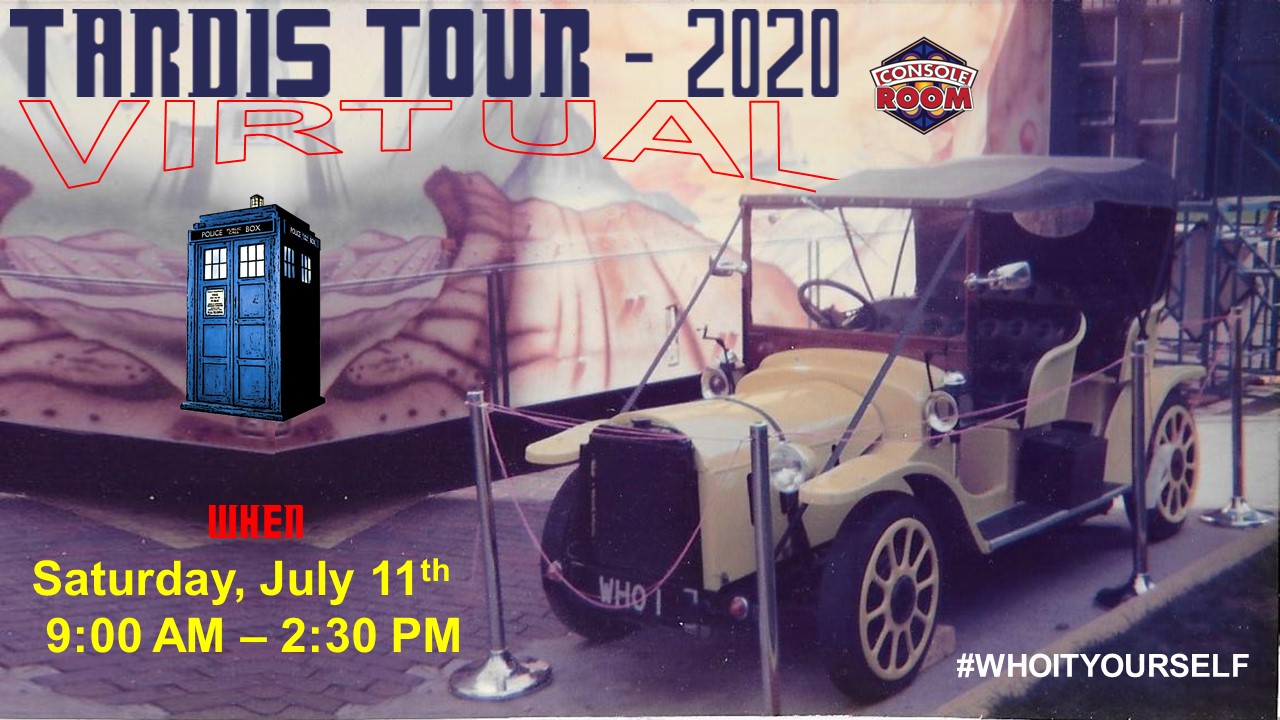 Our TARDIS Tours have been an exhilarating way to spend a day with fellow Doctor Who fans in Minnesota for the past two years. While COVID is keeping us from gathering in person this year, we’re excited to be bringing the TARDIS’ to you in this new, virtual format.

Don’t leave the breaks on! Our #WhoItYourself LIVE event “TARDIS Day” starts at 9AM central time on Saturday, July 11. Take a journey with us on the CONsole Room Facebook page and Twitter throughout the day as we travel virtually to TARDIS’ all around Minnesota. New TARDIS’ will materialize every 15 minutes, with activities and snack breaks built in, just like the real deal!

TIP: Follow along with our EXPLORER TRAVEL LOG to make sure you get the most out of your digital travels! 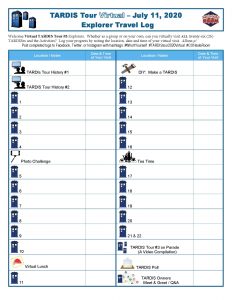 Then join us for a LIVE Meet & Greet/Q&A with the TARDIS owners at 4PM, streaming on our YouTube channel and on the CONsole Room Facebook page, to learn about their TARDIS journeys and ask questions.