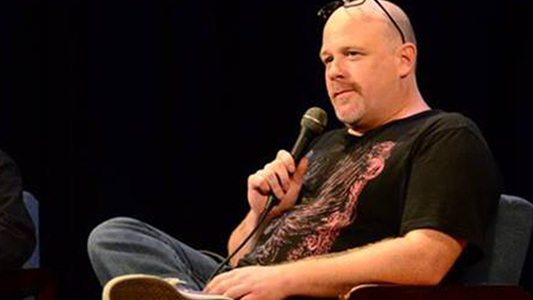 We’re pleased to announce that Dave Schrader will be joining us as a Featured Guest at CONsole Room this year!

DAVE SCHRADER is the host of the wildly popular and internationally heard Darkness Radio Presents: Beyond the Darkness. Darkness Radio is about to enter its 10th year on the air and is considered to be the most popular paranormal themed talk shows on the air following Coast to Coast AM which Dave has also been a recurrent fill-in host exposing his show to about 15 million listeners world-wide.

Dave co-wrote the book The Other Side: A Teen’s Guide to Ghost Hunting and the Paranormal, was the lead judge on the Travel Channel hit mini-series Paranormal Challenge and has appeared on Travel Channel’s #1 series, Ghost Adventures 6 times and Paranormal State on A&E.

He is joined by listeners around the globe on these adventures and is a popular and sought after public speaker on all aspects of the Paranormal. Dave travels the world investigating claims of the paranormal, from the historic and haunted battlefields of Gettysburg to Romania following in the footsteps of the real Dracula to Scotland in search of the Loch Monster and beyond.