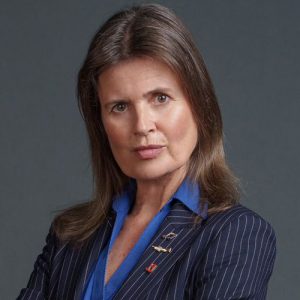 SOPHIE ALDRED (IN PERSON)
Sophie played the role of Ace, companion to the Seventh Doctor, from 1987-1989. Even after the original series was cancelled, the character of Ace lived on through books and comics and, when Big Finish launched their line of Doctor Who audios in 1999, Sophie returned to play the character once again. She is thrilled at being called back to play Ace in Jodie Whitaker’s 13th Doctor’s final story.

She has also written a variety of Doctor Who books; Ace the Inside Story of the End of an Era, At Childhood’s End (13th and 7th Dr and Ace) and a short story called Chemistry for Origins stories.

Born in Greenwich, London and raised in Blackheath, Sophie studied drama at the University of Manchester and worked in children’s theatre, working mens’ clubs and musicals before being cast in Doctor Who. Since the cancellation of the original series, Sophie has continued to stay busy with work on programmes like Words and Pictures, Corners, Tiny and Crew, ZZZap! It’s a Mystery, WOW and many others.

Her extensive voice work, includes animated programs such as Dennis and Gnasher, Bananas in Pyjamas, Peter Rabbit, and Tree Fu Tom. In fact, in Tree Fu Tom, someone called David Tennant played her sidekick! She also records many audio books and dramas for a variety of publishing companies including Audible and Penguin Random House. 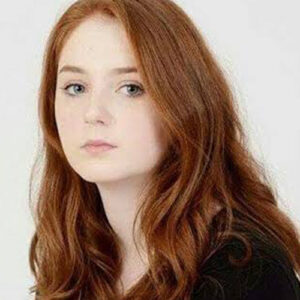 CAITLIN BLACKWOOD (VIRTUAL - SUNDAY ONLY)
Caitlin Blackwood is best known in the Doctor Who universe for playing young Amy Pond in multiple Doctor Who episodes, including “The Eleventh Hour,” “The Big Bang,” “Let’s Kill Hitler,” and “The God Complex.” 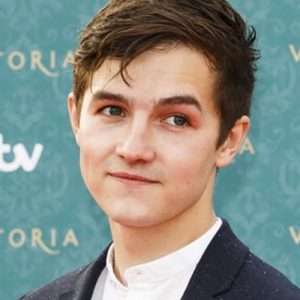 TOMMY KNIGHT (IN PERSON)
Tommy is best known for playing Luke Smith, adoptive son of Sarah Jane Smith in The Sarah Jane Adventures and in the Doctor Who episodes "The Stolen Earth" and "Journey's End". He was featured in the second part of "The End of Time," the two-part 2009 Doctor Who Christmas specials, and most recently in the online short Tribute to Elisabeth Sladen, “Farewell, Sarah Jane” written by Russell T Davies.

DR. ARNOLD T. BLUMBERG is the owner of ATB Publishing, home of Doctor Who essay collections Outside In, Outside In 2, and the forthcoming Outside In Regenerates; Bookwyrm Volume One, a critical deep dive on the Doctor Who New Adventures novels; the 700+-page tome on American Doctor Who fandom, Red White and Who; and many other titles focusing on other fictional worlds like Star Trek, Buffy the Vampire Slayer, Twin Peaks, comics, and zombies. He’s co-author of the Howe’s Transcendental Toybox guides to Doctor Who merchandise from Telos Publishing, designer of other Telos books including The Target Book, and writer of licensed Doctor Who stories “Stolen Days” in Short Trips: How the Doctor Changed My Life and “Mardi Gras Massacre” in Short Trips: Indefinable Magic.

In past incarnations, Arnold was Editor of The Overstreet Comic Book Price Guide, curator of a comic book and pop culture collectibles museum, a “world renowned zombie expert” who authored books on zombie and sword-and-sorcery cinema, and a college professor teaching courses in media literacy and writing.

Currently, he chats about horror and sci-fi cinema with his wife, Natalie B. Litofsky, on their podcast Ghouls in the House, and writes & draws a twice-weekly comic strip, Pickles & Bean.

Additional accolades include being featured by Hennepin County Libraries' Minnesota Black Authors list and being listed as one of 10 Black Change-Makers Influencing the Twin Cities Arts Scene by Minnesota Daily. He is the recipient of local Emmys, as well as the Society of Professional Journalists Page One Award.

A lifelong Whovian, diehard Trekkie, and native Chicagoan, T. Aaron Cisco is an unabashed advocate of squee, and is unwaveringly devoted to his lifelong mission to replace gatekeeping and discrimination with appreciation and inclusion.

MISS SHANNAN was named "Best Stand-up Comedian" by City Pages Magazine in their "2020 Best of the Twin Cities." Campus Activities Magazine® included her as one of eight Top Speaker Picks for 2015.

A self-labeled Geek, Miss Shannan Paul brings roaring laughter to even the most curmudgeonly of crowds. Twin Cities newspaper, the City Pages says, “No matter where you’ve seen (or heard) her, you know just how great Miss Shannan is. With comedy that’s personal and relatable, she has the ability to make you feel like you’ve been friends for years, even if you’re only seeing her for the very first time.”  Her storytelling and irresistible smile are sure to crack up even the most stone-faced curmudgeon. She can relate to everyone whether they be business professionals, students, Sci-Fi fans, sports enthusiasts, or suburban moms.

Miss Shannan is a Comedian, Radio and Television host, Keynote Speaker, Benefit Auctioneer, Voice Actor and Event Host. She has appeared on “Nick Mom’s Night Out,” “Laughs TV,” Hulu and as part of the SXSW Comedy and Music Festival. She has performed with Louie Anderson, Sinbad, and Christopher “Kid” Reid.

She regularly brings her wit, whimsy and pop culture expertise to Twin Cities television as part of "The Jason Show."  Plus, hear Miss Shannan weekly on MyTalk 107.1, and her podcast called "Be Our Geek" on the PodcastOne network.

STEVEN RICKS has been making replica Doctor Who costumes since 2009, moving from amateur home sewer to professional bespoke tailor. For many, his blogs became the go-to place for costume reference on both classic and Nu Who. After being spotted by film and tv costume maker Robert Allsopp, Steven has worked on a number of professional productions including Bohemian Rhapsody, for which he made for lead actor Rami Malek. But his dream came true in 2019 when he was asked to work on Doctor Who itself to make part of the costume for Anjli Mohindra as Queen Skithra in Nikola Tesla's Night of Terror. He was called back for the latest series to make coats for both the Passenger and the chief Sea Devil in Legend of the Sea Devils.

Ten years ago six women from around the globe came together to discuss Doctor Who from an intellectual, thoughtful, and sometimes ridiculous perspective. Verity! Podcast, moderated by Deb Stanish and co-hosted by Erika Ensign, Katrina Griffiths, Lizbeth Myles, Lynne M. Thomas, and Tansy Rayner Roberts, began with a goal of highlighting female voices and female creators, and created a show that approaches Doctor Who from a place of love while not shying away from critical analysis.

MARY (MJ) WILKE is the owner of Wayward Nerd, a digital media travel magazine geared towards nerds, and Babcock & 68th Books, a division of Wayward Nerd. Mary has been a professional traveler for over 25 years, previously writing/editing TourBooks for AAA and spending 200 nights a year on the road.

ANNA WILLIAMS is an Assistant Professor of Astronomy at Macalester College.  A Minnesota native, she completed her Bachelor’s degree at Wesleyan University and her PhD at the University of Wisconsin-Madison.  Anna researches the formation and evolution of galaxies, with a primary focus on the magnetic fields in these systems.  She uses radio telescopes around the world to better understand the role of magnetic fields in the life cycles of stars and galaxies. This work has given Anna the opportunity to travel both through space (visiting telescopes from New Mexico to the Netherlands to Australia) and time (observing light from events that happened billions of years ago).  As a fan of Doctor Who, Anna is excited to attend her first CONsole Room and share how astronomy makes us all time travelers!

Greg has spent most of his life researching British television with his specialty ranging from 1950s-1990s. He has contributed articles to the BBC and BBC America and has helped recover a number of missing British television episodes. He started “From the Archive: A British Television Blog” in 2007 that has reached over a million views, as well as a podcast with the same name. In 2018, Kaleidoscope (the British Television Preservation Soceity) started a successful DVD range using the name “From the Archive”.  In 2019, Greg started a successful Vlog that focuses on reviews of British television releases and a nostalgic look at Doctor Who on VHS.

ROB CALLAHAN (left) is an author, journalist, and professional farmer. Focusing on small scale organic agriculture and compact indoor gardening, he makes his mission one of de-commodifying one of the most essential aspects of life: food. From his small urban farm in Minnesota, he creates growing systems designed to fit in bookshelves and windowsills, developing DIY indoor and outdoor gardens to bring cheap, fresh, and healthy food to everyone regardless of their access to land. As a lifelong Doctor Who fan, he is pleased and honored to join the lineup as one of CONsole Room's invited participants this year, and he hopes to see you there!

LILY MEYER is a stand-up comedian and writer who began her comedy career in Boston, and now lives in her hometown of Minneapolis. Her style of comedy is dark and somewhat honest, drawing mostly from her experiences with dating, eating disorders, and her cat, Charlie. She has performed in the Boston area at Nick’s Comedy Stop, Hideout Comedy and The Comedy Studio as well as in Minneapolis at Camp Bar, Corner Comedy Underground, and Sisyphus Brewing. She has participated in the 10,000 Laughs Comedy Festival, Boston Comedy Festival, and the Sno Jam Comedy Festival.

Tiffany began her stand-up career a decade ago and has been entertaining audiences with her confident stage presence and mischievous point of view ever since.

DIANE SIEBER has enjoyed representing a part of the Twin Cities comedy world for a decade. She brings her chaotic energy to the table telling jokes about live,  life,  and parenting in a way sure to make you feel better about yourself.

TC TREK TRIVIA was founded in 2013 by a group of lifelong Trekkies & Whovians, who realized that the Twin Cities metro was filled with fellow fans looking for new opportunities to engage in their passion! Since then, it remains the only monthly-recurring pub trivia in the Twin Cities, dedicated solely to Doctor Who and Star Trek! For the past four years, the CONsole Room Edition has featured a wildly fun game show format, with an eclectic assortment of games and challenges to win prizes, show off your skills, and test your knowledge of the WHOniverse.

DAVE WHEELER, aka Dave Wonder, is a jack of all trades when it comes to comics and design. He has worked as an inker, colorist, letterer, writer and book designer in comics for the better part of two decades. Dave currently resides in Minneapolis, MN with his family, two dogs, and his dreams! He is proud to be one of the co-founders of the kid-friendly comic company MIND WAVE COMICS, has worked as a toy designer for Boss Fight Studios, and streams regularly about his love of toys on his Youtube channel. Outside of comics and toys, Dave also has worked as a graphics, gear, and merch designer in the professional wrestling industry, having his work seen on AEW, ROH and WWE.

ARON WOLDESLASSIE is a stand-up comedian, author, and producer based in St. Paul. His comedy comes from a blend of observations on race, relationships, and culture as well as personal stories.

Aron is a founding member of the Nordly and Minnesota Tonight. His work has been featured on Minnesota Public Radio, TPT’s Almanac, Mpls.St.Paul Magazine, various literary magazines, and Aron was named a finalist for Sisyphus Brewing’s 2021 “Funniest Person in Minneapolis Contest.

You found a stamp!